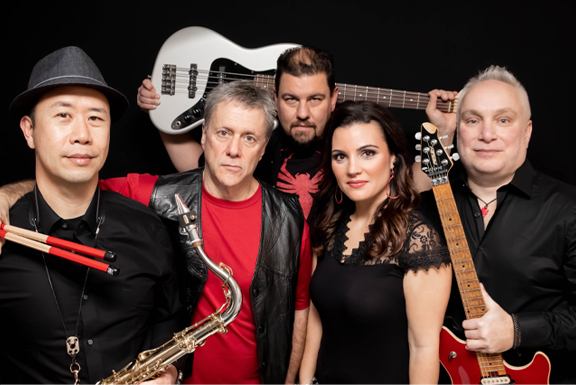 The Story Of MissFortune

MissFortune is a musical group consisting of five different individuals who collaborate together to perform live music for the same reason: It’s all for the love of music! If you enjoy cover bands that put on an entertaining show, this band will have you singing and dancing along to every tune.

This band – comprised of Lucy, Mike, Tommy, Jay and Tae – is passionate about music. Evident by their thrilling shows and surprises along the way, MissFortune truly loves to play for all people. Each member brings their unique personality and creative ideas to the group, performing with enthusiasm. They sing a variety of genres from different decades to satisfy all musical preferences.

When you see a MissFortune show, you are guaranteed to have fun. The band plays at some of Connecticut’s most exciting nightlife hotspots and books private events as well.

Lucy’s love for music began clearly at a very young age. Raised by Portuguese parents, she grew up listening to the sweet sounds of Fado which she believes greatly influenced her appreciation for a wide variety of music styles.

Recognizing her ability to sing and harmonize, her parents proudly recorded her starting at the age of 3 ½, singing to the likes of Billy Joel and Abba, along with “original” songs she would sing as she played around the house.

At the age of 11, Lucy took it upon herself to clip an ad for organ lessons from a local Hartford newspaper and presented it to her parents…and so commenced her adventure in musical education.

Lucy began performing at the age of 14 at Our Lady of Fatima Church in Hartford, CT where she played the organ for about 2 years before she began performing in the well known Portuguese wedding/event band Paradise. Although she started out playing the organ and keyboards, her true passion in music has always been singing.

With an avid desire to sing and perform, Lucy has had the pleasure of collaborating with musicians throughout the years in the states of CT and MA at many weddings, festivals, private functions and nightlife venues with the bands MileQuatro, Os Dias, Bang, Radio Giant and once in a while performs alongside her husband in the acoustic side project ROXX Acoustic.

Michael was one, who, from a very young age, possessed a noticeable craving for music. His parents, realizing this, and supporting him in his passionate pursuit, enrolled him in his first drum lesson at the age of 8. A faithful student, working with a rubber practicing pad and a pair of drumsticks, drove himself hard to learn proper technique, so that he could, one day, remove himself from the boredom of reading music and playing on a trivial slice of rubber, to the excitement of sitting behind a drum kit and providing percussion for a musical group. In order to help expedite, Michael often imitated what he heard from drummers playing on the radio – greatly admiring the talents of the jazz legend Buddy Rich, the forward-thinking flair of hard rock drummer Neil Peart, and the cutting-edge performances of creative rock and new wave drummer Stewart Copeland – committed to emulating their drumming styles and techniques. Very soon after, Michael’s parents put their hard earned dollars towards his first drum kit – a Pearl (to this day, his drums of choice), while Michael’s drumming teacher organized a group of students to loosely form his first band. It was then, that Michael realized drumming would become a large part of his overall identity.

From that point on, Michael has formed and joined a variety of bands throughout his life (Mirage, BreakPoint, and Heartland, to name a few), covering well known artists and working in such genres as Classic/Hard Rock, New Wave, Alternative, Reggae, Jazz, and Modern Country (with much in between). And on an innovative front, one of Michael’s past and current projects is in the performing and recording of original music, presently working with the trio called hound. Michael always had the dream of amassing a full career in music, and although his friends and family encouraged it at a young age, they also reminded him of the harsh realities of ‘making it’ in the music business. Convincing Michael to formulate a backup plan, he eventually received degrees in technology, and currently works in the technology industry in Connecticut (where he also lives with his family) while maintaining his passion for music and making this his number one hobby.

Tom, Tommy, T-Bag, Tominator, Tomaster, Chuck, and Slug (don’t ask) are just a few of the many nick names that Tommy has gained over the years, but seems that Tommy is the one that sticks the hardest! He started having interest in music at a very young age. When he was a kid, his parents bought this old organ at a tag sale, and the first songs he learned to play on it was Jingle Bells and Silent Night. As impressive as that was, that wasn’t the moment that Tommy realized he wanted to be a Rock Star. In the 80’s Tommy was more into the mainstream Pop music, and really had no interest in any particular instrument.

In 1988, “One” song changed his entire outlook on music and completely converted him over to heavy metal. Soon after that Tommy bought his first electric guitar. He didn’t do much with it, but was really excited he could finally play some parts of Metallica songs! Years went by with no lessons, not really doing anything with it. A few years ago a good friend asked Tommy if he would play bass for his band. Tommy, never really playing bass at all, decided to give it a try. He loved it instantly, and learned bass while playing for that band. Over the years, Tommy’s been in a few bands, such as: BOD, No Way Out, Tainted Vision, Lemon Ink, Spank, and now in MissFortune. In conclusion, Tommy enjoys playing music. Of course he wishes he could do it for a living, but come on… computers are so much more fun.

“Music gives soul to the universe, wings to the mind, flight to the imagination and life to everything”
-Plato

Even before Jay played music, he read that quote and it struck a chord with him as to the importance of music. Being the “Late” child, Jay was exposed to a vast variety of music ranging from Big Band, Frank Sinatra, Tony Bennet to Led Zeppelin, Cheap Trick and Pink Floyd. But it was the first concert he went to at the age of 12 that set him on his musical path. Attending Van Halen with brothers and being front row, he experienced the masterful excitement of Eddie Van Halen and was instantly hooked.

From that moment on music was a staple in Jay’s life. Starting with learning guitar, he then branched off into piano as well as some bass and drums. Though he really never took any formal lessons, he developed a good musical ear.

While living through the 80’s and the great Hair Bands, Jay discovered Stevie Ray Vaughn and he again was blown away with the innovated technique that again helped shape his playing style and tone.

Just like every kid that played an instrument, the next logical step was joining a band and playing live. Playing in early bands such as Tune Stone, Behemoth and Slap the Cat to bands later in life as an adult like Tomorrow Just Started and the original project Kelly Tamale Band. Jay not only sharpened his playing style, but learned what it took to be a member of a successful band family.

Today playing in Miss Fortune, Jay has the privilege to play with four other talented individuals who not only perform for the love of music, but also share in the great comradery and friendship that only a true band family can experience.

Tae’s musical journey began when he picked up a clarinet in 4th grade. It was quickly apparent to the band director that he had a talent for music, and he helped accelerate his growth.

By middle school, he was taking piano lessons as well, and within 3 years, was performing pieces by Schubert and Mozart.

Wanting to branch off into other areas, Tae first discovered saxophone through his growing interest in Jazz. At 16 years old, he picked up the saxophone for the first time and joined the school’s jazz band entering his junior year in High School. In his senior year, he earned the lead Tenor spot in the CT Eastern Regional Jazz band, as well as winning awards in out-of-state competitions both individually as a soloist, and in a group.

Today, Tae has performed with local bands such as LiveWired and LA’s Backstage Pass. He is also the co-founder of Stiletto – a Billy Joel tribute band, where he lends his talents primarily as a Saxophonist, while playing multiple other instruments as well.

As the newest member of MissFortune, Tae aspires to add another layer of magic to an already outstanding cast, and build on their success over the years.